I’d like to talk about what is perhaps THE most sought-after wristwatch on the market today, Patek-Philippe’s Nautilus. Much has been written about this model and its links to another steel watch, but to understand how we got where we are today with this model and its extended family, we need to go back further in time.

All great watch designs have great, or at the very least “lucky” designers. Additionally, all designers are initially influenced by those who came before them. The same is said of the Nautilus’ designer, Gerald Genta, who was born in 1931, in Geneva, Switzerland. Genta originally trained to be a jeweler, but eventually turned his attention to watches. In this article, let’s get into the mind of the designer and examine what makes this watch so special.

Genta had worked for design firms before becoming an independent designer. At its core, design is artistry which evolves over time; just as you can see the evolution in Picasso’s paintings or in Frank Lloyd Wright’s architecture, so, too, you can see evolution in Genta’s designs. Let’s go back to Genta’s first commission by Patek and trace that design lineage to the Nautilus.

In 1967, Patek Philippe wanted an Art Deco design. Patek-Philippe had produced a rectangular, Art Deco designed watch for one of their retailers in Brazil, but only for that local market and only for a few years. Patek had already had considerable success with the Calatrava, which was based on the Bauhaus art movement, a concurrently-running art philosophy to Art Deco in the 20s and 30s, but in the 1960s they wanted to expand their portfolio. So they hired Mr. Genta.

Starting with “the golden ratio,” from which much Art Deco finds its inspiration (a dimension ratio of 1 to 1.618…) he set out to create a clean, simple, elegant Art Deco design, but one that

wouldn’t be too rigid. What emerged was a model called the Golden Ellipse, which was indeed influenced by Art Deco, but lacking any straight or parallel lines. The result was a softened and rounded rectangle. Keep that image in mind. 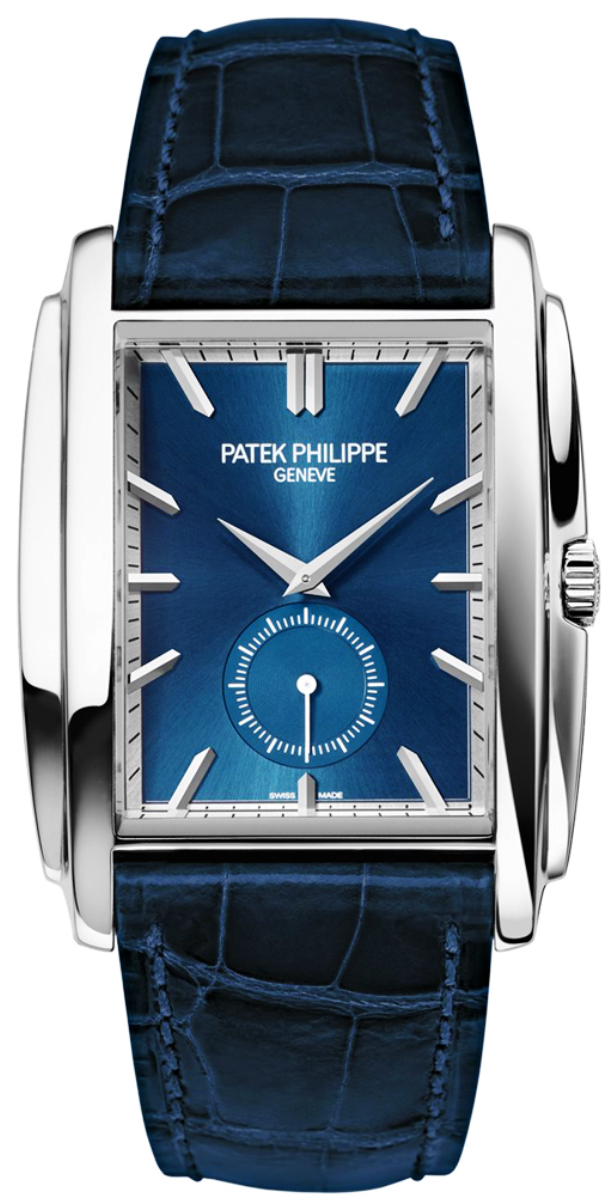 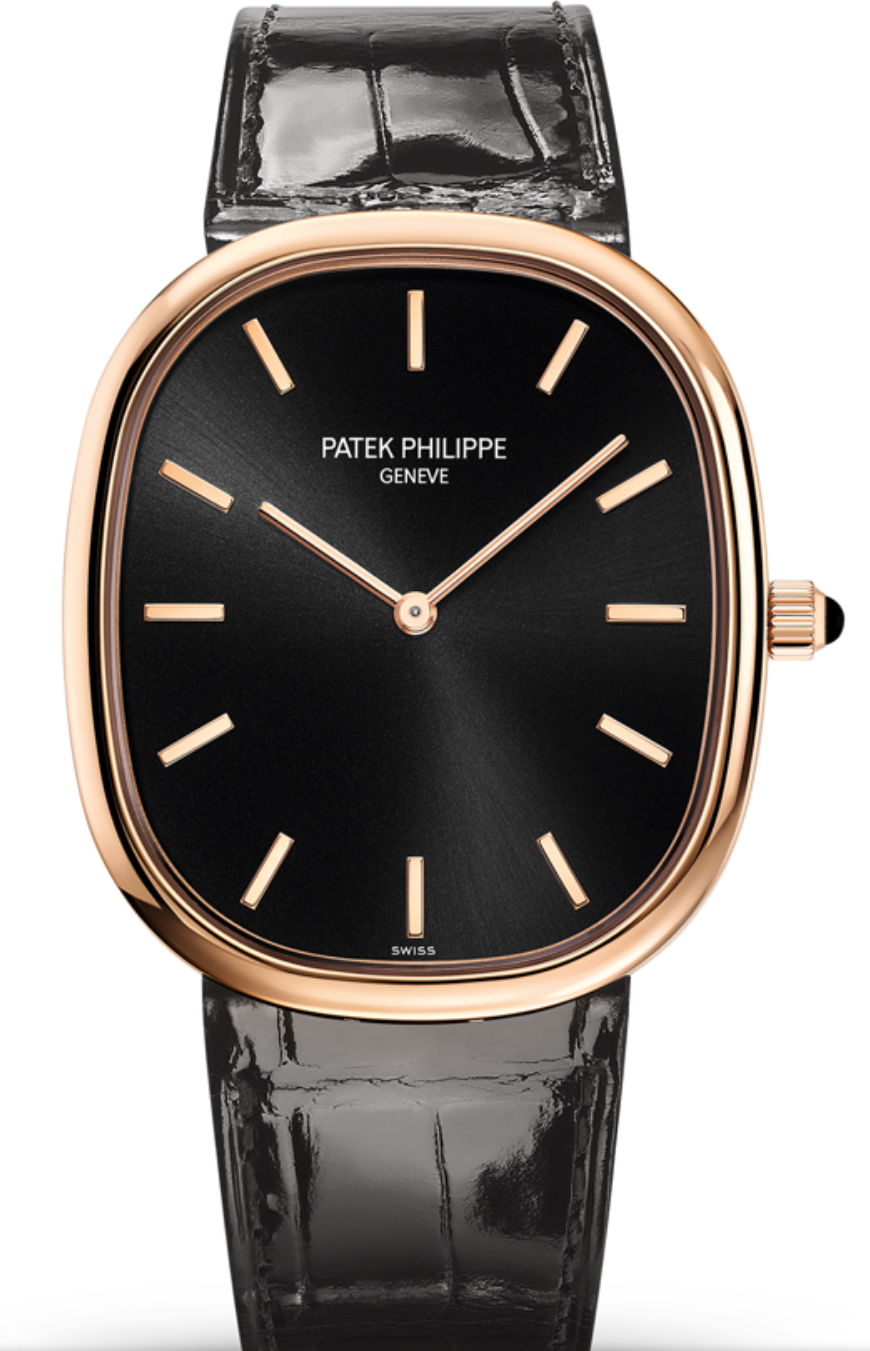 Five years later, in 1972, Audemars-Piguet, who had Genta on retainer came to him with a very last-minute request. They needed a sport watch to show to the public the next day. Genta feverishly went to work and after an all-nighter, drawings were produced rendering a new steel watch with a bezel that had screws visibly showing and an integrated bracelet, dubbed “The Royal Oak”.
Genta said he was inspired by the screws on a diver’s helmet, but that he had decided to create an octagonal, instead of round, bezel. Audemars-Piguet launched it in stainless steel at the same price as a gold Rolex Datejust. Initially, it was not received well, but as the quartz crisis began to ravage the Swiss industry, the cognoscenti and aficionados began to recognize it for its ground-breaking design, and it fell into favor with the crowds who could afford it.

In the “official” story Genta tells of creating the Nautilus, he says that after seeing the top brass from Patek-Philippe having lunch during the watch show at Basel, Switzerland, he asked the waiter for a pencil and a piece of paper. After doing a 5-minute design he brought it to the Patek executives to show them an idea he had…whether that’s 100% accurate or not, I’m not going to dispute. The most important part of the story (for this writer) that is seldom told is that according to his widow,

Evelyn, Gerald Genta approached the crew at Patek-Philippe and said, in essence, I have an idea for the evolution of the Royal Oak.

Whereas the Royal Oak had a very industrial design with straight, chiseled lines and sharp corners, hard edges and mostly non-reflective brushed features (save for the downward slope of the bezel edge and bezel screws), Genta desired to create a softer, more luxurious, sport-elegant design worthy of the world’s number one premier watch brand. The octagon of the Royal Oak, like the rectangular Golden Ellipse before it, had its edges softened and its corners curved so as to, again, produce no parallel lines – a softened and rounded octagon. 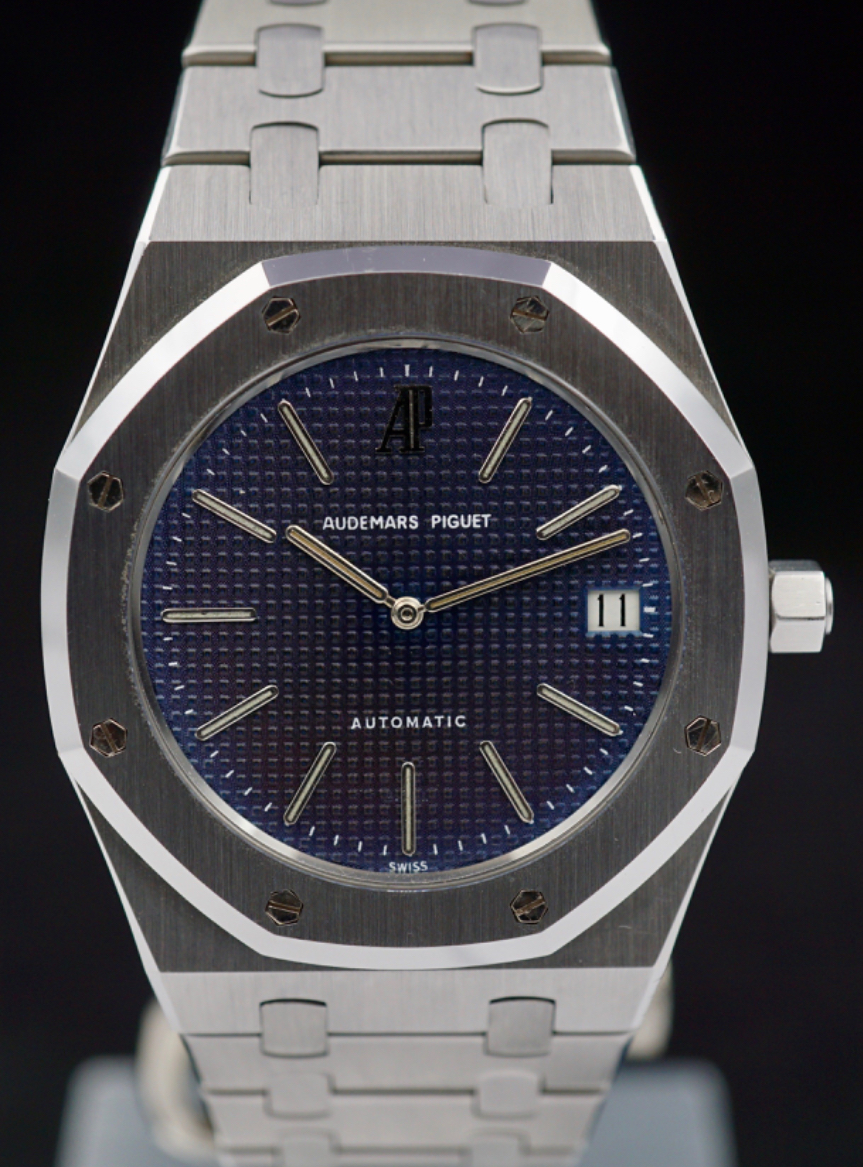 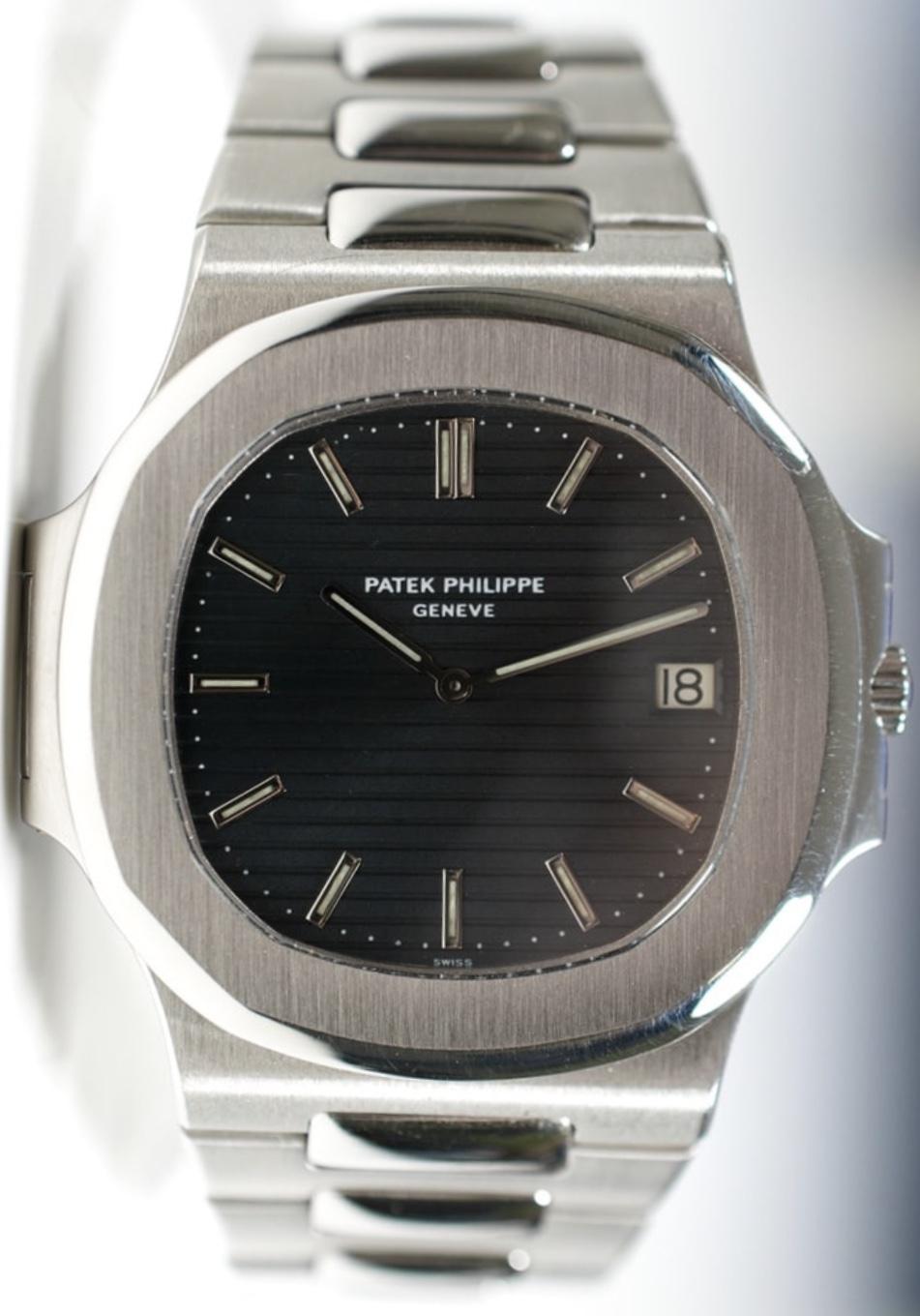 Contrasting the bezel and dial design, Genta created strictly parallel lines for the dial and bracelet, but retained some of the softness in the rounded, highly-polished center links. To articulate the contrasts of shapes and edges, Genta designed strong, parallel, horizontally embossed and equidistant furrows and ridges running east-west across the dial. For the hands, straight batons with rounded edges were used which beautifully matched the applied indices at each hour marker. Both hands and markers were filled with Tritium to produce excellent legibility at night. In keeping with the demands of the times, the date was placed at 3 o’clock, allowing it to be a very utilitarian watch for everyday, as well as fashionable luxury timepiece.

Radiating out from the dial, the bezel, which retained the same shape on its inside and outside edges, was vertically brushed on top. The sides, which sloped downwards at an approximately 45 degree angle before dropping straight down, were highly-polished and gleamed in the light, making the brushing of the bezel stand out even more.

Next came the parallel lines flowing outward from the dial and expanding into the links of the integrated bracelet – like a rock being thrown into a pond and the ripples getting wider as they radiate out and away from the entry point. Genta chose a brushed “H” link for the bracelet, to maximize the visual impact of horizontal lines throughout this timepiece. A polished rectangular box link joins each H link together and is rounded on top making it very subtle to the touch and giving the link an almost sensual feel. On early models the bracelet ended with an open clasp, but eventually a fold-over clasp was added for security.

The first thing one notices when holding or looking at a picture of the Nautilus is the “ears” or hinges on each side of the case. For the initial design of the 3700, they were functional, since the case was created using a 2-piece construction rather than the standard 3-piece construction. From the 9 o’clock side, the bezel would swing across and screws at the 3 o’clock side of the case closed off the two halves like a clam, making it waterproof to 120 meters. The advantage to this design was that the more water pressure increased on the watch, the greater the waterproofing was, provided that the crown had the correct sealing adequate to keep water out of the tube. When the watch was redesigned for the 2006 launch of the 5711, an exhibition back was added and the watch ended up becoming a 3-piece constructed watch. However, modern technology allowed the 5711 to still retain water resistance to 120 meters.

Since the movement chosen for this watch (Patek-Philippe 28-255) had no running seconds, it allowed the Nautilus to have an initial thickness of only 7.6mm. Consider how impressively svelte this is when compared to a 100-meter-water-tested Datejust, which is 10.4mm. Later, when Patek released the 2nd generation in 1981, dubbed the 3800, the Manufacture added their own movement with running seconds. At the same time, they also reduced the diameter of the watch to 37.5mm and the profile was slightly slimmed to 7.5mm, in order to try to retain the same relative proportions. The fact that they added a second hand, which should have increased the thickness by at least a millimeter, but actually managed to reduce the profile is impressive. Incredibly, the timepiece still maintained its 120 meter water test, thanks to modern technology. When the current model debuted at 40mm with exhibition back, the profile was fattened to 8.3mm. These dimensions actually kept its proportions truer to the 3800 than the 3700.

In 1998, with the 3710, Patek added a power reserve and Roman numerals on a flat dial, dispensing with the embossed dial. In 2005, they added a power reserve, moonphase and date with the 3712. In October of 2006, at the 30th anniversary of the Nautilus, Patek introduced the 5712/1A, which was larger in size than the 3712 and brought it, along with the 5711/1A, in line with today’s contemporary taste of 40+mm for a dress-sport watch.
Since that time, Patek has expanded the Nautilus line to include many useful complications, but that’s a story for another time.