In 1957, the world was still recovering from the ravages of World War Two, which had ended only 12 years earlier, but there was a buzz of creativity in the mechanical worlds of both automobiles and watches. Chevrolet introduced the Bel Air, a beautiful, curvaceous piece of metal, which years later would be the car musicians like Randy Bruce would sing about when they sang, “Got my‘ 57 Chevy.” It was big, beautiful and built for speed.

1957 was also the year that the watch brand with the world’s highest revenue, Omega, released their iconic Speedmaster wrist watch. It, too, was big, beautiful and built to record speed.
Just as the BelAir would influence the industry into which it was born, the Speedmaster would influence the watch industry and quickly become THE quintessential chronograph of the 20th century. It was by no means the first wrist chronograph to go into production, nor was it Omega’s first. But the Speedmaster had two things going for it that made it an instant hit. The first was that Omega placed the tachymeter outside the dial on the bezel for better legibility. The other was that at 39mm, it was a very large watch for its day and had a commanding presence. It was noticed.

Prior to this, all wrist-borne chronographs had their timing scales on their dials, protected by the crystal. However, this made for a very cluttered dial. Historically, timing scales were one of three variations: a pulsometer, also known as a “Doctor’s watch” because you could time a pulse for 15 or 30 seconds and figure out a patient’s heart rate more quickly than the full minute required; a tachymeter, used for speed calculations; or a telemeter, with which you could time sound travel. This latter instrument was highly valued during war time because it allowed the wearer to see a flash of light from a bomb exploding and by timing how long it took for the sound to reach the wearer of said timepiece, he could determine how far away the actual battle was. (You can also, in like manner, use it to determine how far away a lightning storm is by starting the chronograph at the first lightning flash and stopping it when you hear the thunder.)

But in this post-war age when machinery was being invented to go faster and faster, Omega, in a stroke of genius, chose to clean up the dial and place a tachymeter on the bezel of the watch which allowed it to be read much more easily. If its owner desired to measure the speed of his new car (or a

horse, if enjoying equestrian affairs) or figure out the rate of production, as in a factory, he would now be able to read it easily. The first version had black-filled scale on a silver track, but by year two, Omega had swapped out the steel, silver bezel for a black, aluminum bezel with silver number track. 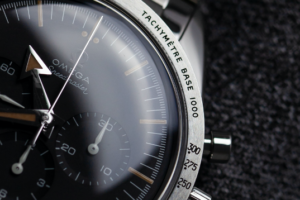 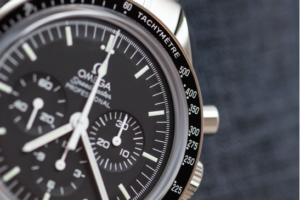 Of course, since all chronographs at that time were manual-wound, Omega called on their sister company, Lemania, located in the Vallee de Joux, to produce a reliable, hand-wound chronograph movement for them. Omega had merged with Tissot in 1930, just as the Great Depression was beginning to reveal its depth, and the two brands acquired Lemania in 1932, forming the conglomeration, Societe Suisse pour I’Industrie Horlogere or SSIH, for short. Later, Lemania would be sold off, become the primary supplier to Breguet and then be bought with Breguet by Swatch Group. 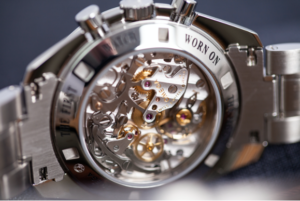 Initially, the caliber 321 was chosen (Lemania’s in-house designation was the 2310) and Omega equipped all Speedmasters with the caliber 321 until 1968/69. Beginning in late 1968, Omega began to use the caliber 861 because Lemania felt that the cam-engaged chronograph was more sturdy, more accurate and less expensive to manufacture than the 321’s column-wheel engagement. Over time, Omega added to their assortment the sister caliber 1861, a more decorated version of the 861 for the Speedmaster variations with exhibition back.

It’s worth noting that with the exception of the initial moon landing, Omega has used the 861 for most of NASA’s space missions, including the famous Apollo 13, during which astronaut Jack Swiggert used the Speedmaster to time a burn of exactly 14 seconds to angle the lunar module in the correct direction for re-entry into the earth’s orbit. (A second or two difference would have meant not getting home.)
Although the Speedmaster had started out as a 39mm watch, by 1959 it had expanded to 40mm and by 1962 it reached its gargantuan size of 42mm, where it remains to this day. To put this into proper perspective, keep in mind that most men’s watches were 31-35mm, with Rolex’s Datejust being a very large timepiece at 36mm. 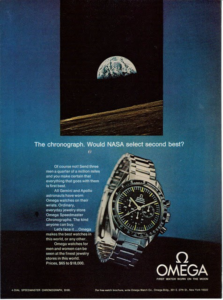 Numerous deviations of the Speedmaster have evolved over the years and if you seek the deeper minutia, there are scores of articles circulating online and in print that cover every aspect of the model and all of its variations. The most
significant, in my mind, are about the hand changes from the initial “Broad Arrow” hands to the “Alpha” hands to the current “Baton” hands, which have remained since 1962, and the movement changes – from the 321 to the 861. There are also case design changes that were subtle, but the most important aspect of the Speedmaster when considering adding a “Speedy” to one’s collection is that the look is “essentially” the same since 1962.
In its historical context, the Speedmaster was chosen by NASA for all Manned Space Missions, and particularly for all Extra Vehicular Activity, which is a fancy way of saying, “any activity outside the space capsule.” Legend has it that in 1962, NASA purchased a few Chronographs from a few of the most reputable brands from a local jeweler in Houston and only the Omega Speedmaster completed all of the 11 arduous criteria, although not the first time. So, for every amazing moment of NASA’s glorious past, the Omega Speedmaster has been there.
OFFICIAL OMEGA ADVERTISEMENT

In its horological context, consider that exterior component patents in Switzerland are protected for 5 years (versus movement patents, which are protected for 15 years). Having released the Speedmaster in 1957, when the 5 year patent expired for the tachymeter-on-bezel application, one of Omega’s main competitors released a manual-wind chronograph with tachymeter on the bezel as well, at the Baselworld Watch and Jewelry Show in 1963: the Rolex Cosmograph “Daytona” named after a car race, and having a certain similar resemblance to the Speedmaster.