Since Patek-Philippe re-introduced their world time wristwatch in the year 2000, the cult-status of this complication has reached dizzying heights, as evidenced by watch auctions over the last 2 decades. But what really climbs the charts are the enamel and cloisonne enamel dials that reach the auction block. Why is that? And what makes them so special?

To truly understand this phenomenon, it’s important to first realize that each year, Patek- Philippe makes fewer than 1,000 world time watches. Of those, only 50 to 100 possess an enamel dial. Additionally, there are very few master enamelers these days, and even for them, the process of creating the dials of these enamel models is exacting. Let’s take a look at a brief history of enamel and its various applications.

While the earliest decorative enamel pieces were found on rings discovered in Cypress over 1300 years before the modern era (BC), our modern techniques by the artisanal work of key Genevan residents dates back to the late 1700s and early 1800s. The market was expanded upon by the increasing interest in portable horological timepieces.

In its purest state, vitreous enamel is a type of powdered glass that is spread across a metal surface and fired in an oven at between 1,380 and 1,560 °F. As it melts in the extreme heat, it liquifies, flowing outward to the edges of the surface. As it cools it hardens to a smooth and very durable coating. For each layer or color, depending on which application is used, successive firings are needed. Since the glass becomes liquid, it needs borders to keep it from spilling over the sides of the metal substrate upon which it is spread. The two most common techniques are Champlevé and Cloisonné.

Champlevé is a technique where the metal is fairly deeply engraved, creating a pool or reservoir in which the enamel can sit, and then it is fired. If it is guilloched first, the artist may want to highlight the guilloche work and therefore use a single or thinner firing. If it is simply a deeply etched engraving, the artist will most often use multiple firings, which gives the color a deeper, richer color, much the way a car aficionado may have 10 coats of clear applied to a metal-flake paint job, only to have it buffed down to 5 shimmering, ultra clear coats.

Cloisonné, on the other hand, takes the opposite approach. It starts with a flat surface and the artist draws the basic outlines of the design’s features. Then the artist takes gold or silver wire and painstakingly lays it over those same outlines, carefully bending the wire to match the drawing. What results are walls forming partitions or compartments (“cloisons” in French) within which to place the enamel before firing. Here is the most important takeaway: no two depictions are ever exactly alike. The artist has a pattern, but what emerges, only upon inspection of two or more pieces side-by-side, are small but detectable differences from one piece to another. 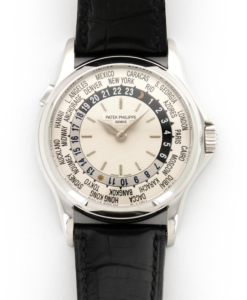 Enamel dialed wristwatches reached their height of popularity during the post-WW2 period from the 1940s through the early 1960s. Dial manufacturers such as Stern Frères and Beyeler produced works of art for Patek-Philippe, Vacheron-Constantin, Rolex and Omega, with all manner of depictions. However, it’s important to understand that often those dial companies had to contract that type of work out to local artisans, of
which only a few competent individuals could perform this level of service. By the 1970s, enamel watch dials had all but disappeared, and the trade virtually vanished, helped by the onslaught of the “quartz crisis.”

The history of Patek-Philippe’s world time wristwatches parallels their close work with Louis Cottier, who developed the complication. A separate, much longer article would be required to plumb the depths of this history, so I’ll leave that to another time. But upon the death of Louis Cottier in the late 1960s Patek-Philippe retired the complication altogether. So it was big news in the year 2000 when Patek- Philippe released their first world time watch in 35 years, the 5110, with a diameter of 37mm and a new movement, the Caliber 240 HU (Hours Universal or Universal Time).

The case was made with an A-symmetrical design, providing crown guards protruding smoothly to the outer edge of the crown, so as to protect against impacts. However, watch aficionados who knew of Patek-Philippe’s history of enamel dialed world time watches would need to wait another 6 years before the brand would reintroduce one of its most coveted and cherished dial designs.

In 2006, Patek-Philippe introduced the 5130, a 39.5mm case housing the same, now legendary, caliber 240 HU. Built in the same style as the 5110, although with proportionally slightly longer lugs, this model became an instant and welcome addition to the collection, since tastes in men’s watches were trending ever closer towards the 40mm mark. With its thin, rounded bezel, the 5130 would wear, visually, close enough to this now evolving standard to satisfy a great many customers.

With the launch of the 5130 in 2006, Patek also offered an extension by adding the 5131J (yellow gold), with Cloisonné enamel dial depicting an orbital view of the Atlantic Ocean with the Americas on the left side of the dial and Europe and Africa on the right. From the moment it was released this model commanded prices two to three times its retail on the secondary market, due to its very low production. Since almost no one had been producing this type of dial since the 1960s, there were no schools offering courses to train the new generation of watch makers and dial makers. It had been handed down by artists who would take on apprentices and even Patek-Philippe had to hire a local Genevan artist.

The 5131J was followed by the 5131G (white gold), depicting an orbital view of Asia centered over India with Africa and Europe on the left side and most of Asia on the 12 o’clock side of the hands and with Australia and Easter Asia on the right side of the dial. This dial was followed by the release of the 5131R (rose gold), depicting a view of the Pacific Ocean, with the Americas on the right and Asia and Australia on the left of the dial. All 3 of these variations were offered on alligator straps with deployment buckles. The collection was rounded out with the release of the 5131/1P (platinum), depicting a view of the Northern Polar ice cap, with Asia and Europe on the right and Greenland and North America on the left. Due to this piece being on a platinum bracelet, the price of the watch was twice that of any of the gold pieces, and the weight 2.5 times that of the gold offerings.

In 2016, Patek-Philippe decided to completely redesign the case, and dove into its wealth of catalogs to create the 5230, also releasing the extension, 5231J. Patek aimed to set it apart from its sibling in a number of ways, beginning with its size. Noticing a growing Asian clientele and a trend among Europeans towards slightly smaller dress watches, the brand decided to reduce the world time from its 39.5mm 5130 case size to a more elegant size of 38.5mm. The difference, in-and-of-itself, is barely perceptible on the wrist. But what makes it somewhat more noticeable is that Patek-Philippe decided to forgo the crown guards and go back to a symmetrical case design. The other detail they changed, and one that this writer LOVES, is that instead of lugs that flow smoothly off the case, Patek opted for a fully rounded and symmetrical case with lugs that look noticeably soldered to the case, but which have their own character, very reminiscent of horns found on many 1950s wristwatch cases.

The 5321J was released with the now classic orbital view of the Atlantic, very closely resembling the 5131J, but with an arguably more colorful dial. Again, as stated before, each dial of each model will be a one-of-a-kind, and even looking at pictures of any particular model you will notice slight variations in the laying of the gold wire outlines and the coloring of the continents.

Truly, to own a cloisonné enamel piece is to own a “piece unique,” which is why these pieces require quite an investment on the part of the initial purchaser, and why they command such a premium on the secondary market and at auctions. As we look back on the pieces with enamel dials from the 1950s and 60s, if history is any judge, the pieces invested in today, will pay for a second home in 30 to 40 years time, and why “You never actually own a Patek Philippe. You merely look after it for the next generation.”